Calculation of Capacity in the TAG Pipeline System

The method which has been applied for the calculation of the technical (nominal) capacity on the transportation system of TAG GmbH (TAG Pipeline System) uses the formulas and the models of the theory on gas transportation through pipelines and, in particular, considers the following factors:

The algorithm provided the use of a set of single-phase friction factor correlations:

the term f is the Darcy-Weisbach friction factor.

It is very general, and is written in terms of enthalpy H.

The equation takes into account the enthalpy changes due to changes in elevation and kinetic energy, and to heat losses to the sourrounding.

In deriving the value of the temperature from the enthalpy, the program accurately simulates Joule - Thompson effects.

The form of the equation for gas flow is the following:

The term relative to the quote of the heat transferred from the fluid to the surroundings, contains the value of the overall heat transfer coefficient U.

Let's consider a cross section of a pipe with the layers through which heat is transferred.

Each layer has a resistance to heat transfer. The overall heat transfer coefficient is calculated in the following way:

The resistances to heat transfer considered by the program are:

Rinside film due to boundary layer inside the pipe
Rpipe due to material constituting pipe
Rcoatings due to material of different coatings
Rexternal due to surroundings (soil, air, water)

The general expression of the global resistance per unit length for pipes surrounding by air or water is:

or for buried pipes: 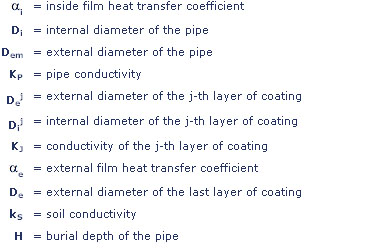 For the calculation of the term αi in the above expressions, we have to make some considerations.

The expression for this coefficient assumes different forms for different type of flow; we shall discriminate between laminar and turbulent flow. 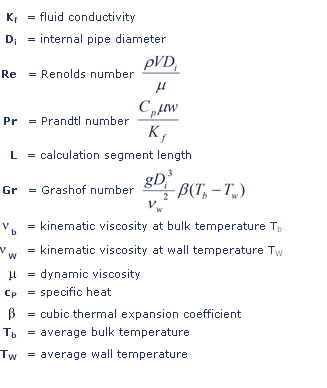 where the symbols have the previous meaning.